I can't believe 2011 is over..........here's to a healthy, happy and prosperous new year for all of us!  If you are reading this THANK YOU for being on this website.  I hope you stick around a while and come back often.  Invite your friends, share a memory, or…

Member Don Degood sent this to me, and it is worth watching,  This Army Airborne soldier shows exceptional skill and excellence as he shows you how he prepares to land inside the University of Michigan footbal stadium to a grateful crowd.  Love it!

Iraq Commitment Medal - In the works?

Earlier this year Iraq’s Minister of Defense, Dr. Saadoun Al-Dlaimi, sent notice to the Secretary of Defense authorizing the Government of Iraq Commitment Medal.  Here is an example of how we receive information and announcements on new military medals here at Medals of America. This medal has yet to be adopted and produced but check out this …

Nearly every day, Fold 3, one of our Trusted Partners of this website, has a cool spotlight story. It is always something really interesting and unique.  Today the focus was about Bob Hope and his frequent trips overseas to entertain troops during USO shows.

Last Saturday and this past Wednesday, I had the pleasure of going to Motts Military Museum in Groveport, Ohio.  From the road, you see a nondescript block building with a flag pole out front, and several aircraft and a landing craft out back.

The inside will blow you away.  Founder and Director Warren Motts has amassed thousands and thousands of…

On August 12, 1944, 22-year-old 2nd Lt Alexander Jefferson of the famed Tuskegee Airmen 332nd Fighter Group was flying his “red tail” P-51 Mustang (named Margo, after his girlfriend at the time) on his 19th combat mission over Europe. His formation’s mission…

Two months ago, I was returning from an RV trip out east, when I saw a sign for the National D Day Memorial. It seems to me that it was about 30 miles off I-81. (Bedford is east of Roanoke and half way to Lynchburg.) Anyway, the previous month I spent an entire week on Normandy Beach visiting all the museums there, and I recalled reading that the small town of Bedford had lost more young men per capita during Operation Overlord than any other town in the US. I expected to see a nice monument…

Member Don Degood sent this to me about Christmas Cookies, author unknown.  Having eaten more than my fair share of goodies already this season, this makes me feel a little better!

1. If you eat a Christmas cookie fresh out of the oven, it has no calories because everyone knows that the first cookie is the test and thus calorie free.

2. If you drink a diet soda after eating your second cookie, it also has no calories because…

This past week I have had, for lack of a better term, the Crud:  Nasty cold, coughing, headache and tired.  I am on the tail end of it, thankfully.  My husband and little one (three year old Camdyn) have had it right alongside me.   As a 7th and 8th grade teacher, I have gone to school many times like today when I feel like I should be home, on the couch, with a remote in one hand and a tissue in the other.  That's not realistic, though.  Just like many of my colleagues you go unless you are…

In the Great Resources section of the website, and in the forum, you will start seeing new stories.  These were written by member Ron Albers on behalf of Motts Military Museum in Groveport, Ohio.

I had the pleasure of…

Member Richard Boyd made me laugh out loud with his description of getting off the bus for his first day of Marine Corps Recruit Training.

This Saturday my husband and I and a couple of friends are going to Motts Military Museum for the first time.  We are also meeting Your Military Story member and museum expert Colonel Ron Albers, USAF, Retired.  He is going to give us the tour of this magnificent…

This is an interesting story of a Christmas Eve in 1914 when British and German troops agreed to stop fighting. They gave themselves a reprieve from the bloody trench warfare of World War I, lighting cigarettes for each other, singing Christmas carols and exchanging addresses.
This video tells the story well.

Tomorrow, a reporter from the Columbus Dispatch is coming to interview me about the website :)

She asked me to dig up some of my military memoribilia which shows why I started this site.  Down in my basement I have a box of treasures.  In it lies every letter or card anyone sent me while I was gone for training (this was in 1993).  My mother alone sent several dozen pieces of mail, as well as tons from my sisters, other family and friends.  It made me realize that someday pretty…

I was just watching Big Shrimpin' and Swamp People on the History Channel.  While these two fine programs warrant blog posts all their own for different reasons (if you have seen these you know what I mean :) )  it is the characters' accents which jog my memory.

If you haven't seen them, the show has to use subtitles most of the time so you can understand what the people are saying.  Yes, English is their first language, but the characters on Swamp People (who "choot"…

70th Anniversary of the Attack on Pearl Harbor

This was originally posted on Medals of America's Blog under the title "Attack on Pearl Harbor 70th Anniversary". With the Anniversary coming tomorrow we thought that the readers here would find this a valuable post.  Also, please stop by our website and shop our huge selection of…

Wednesday will mark an unbelievable seven decades since the Japanese attack on Pearl Harbor. I can only compare what those who were alive at the time felt by thinking about 9/11. The country was a mass of emotions: anger, disbelief, sadness, horror, patriotic, and probably most importantly, resolve.

I have talked to many World War II veterans about Pearl Harbor day. All say how the United States came together like glue. As the numbers of those Pearl Harbor survivors dwindle, I hope… Continue

Army Coin- Get it Now Before Its Gone! 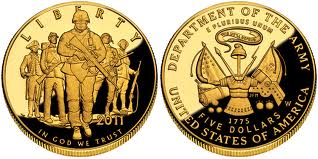 The United States Army, in conjunction with the U.S. Mint, has six fantastic Army coins available only until December 16th.  These coins authorized by Congress commemorate the Army's strong history as military defenders.

There are silver and gold versions available, including $5 gold coins a silver dollar and a clad half dollar.   These would…