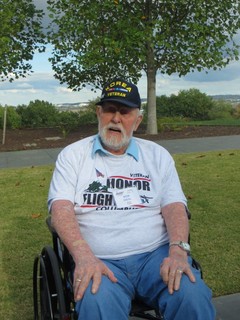 I found out today that the last veteran I took on an Honor Flight, Mr. Bob Diehl of Marysville, Ohio, passed away Saturday.

Bob and I were on a flight this past September.  Bob served in Germany during the Korean War and was a First Sergeant when he left the military.

We had a great day on Honor Flight, and Bob really enjoyed it.  One thing I remember is during the "mail call" on the bus on the way back to the airport, I had to read all of the many heartfelt letters aloud to him.  You see, Bob was legally blind.  I read a three paged love letter from his wife of 62 years, heart-wrenching letters from his daughters and grandchildren, and from six year olds he had never met.  Neither of us had a dry eye.  Rest in Peace, Bob.  It was a pleasure knowing you.