What is the Lucky Bastards Club? 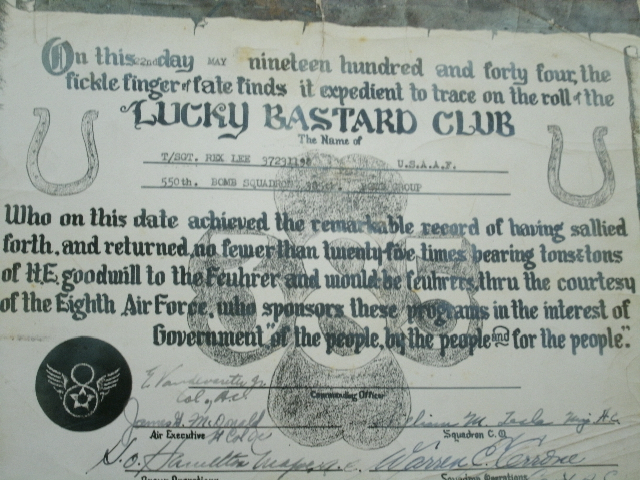 If you haven't heard of this, don't feel bad.  I hadn't either, until member Richard Bergandine sent me a bunch of cool photos that is.  I had to look it up- what in the world is a Lucky Bastard Club, and why does someone get a certificate for being a member?  I figured it had something to do with escaping death, since after all, we are talking military here.

Apparently, this was popular with the Army Air Corps in World War II. Upon reaching a certain number of missions (usually 25) the person was crowned the honor of being called a Lucky Bastard.   I found that many units had their own unique certificate, like the one shown here that Richard sent me.  There is a lot of humor behind them, and they are also quite collectible now.  I found, however, that some did not like receiving the certificate or becoming a member of the "club", because they felt it might jinx them or bring them bad luck.

I am sure some of you could school me on this topic, like how other eras or branches of service used the term as well.  Hey, and maybe even some of you were Lucky Bastards.  Do tell.  Just comment below!