YOUR Military Story- What details, duties or jobs were you assigned during Boot Camp? 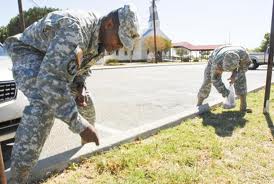 Note: This is part of series to help ALL who served and their families to reminisce, remember and record memories and stories of your military service. Be sure to check out all the other posts and comment in the white space below each one!

Last time I talked about the barracks or quarters you lived in while at Boot Camp.

Let's talk about the inevitable details, jobs, grunt work, duties, whatever you want to call them, that you were tasked with.

I remember being on KP (Kitchen Police), which is a funny name in and of itself.  Why the word Police?  The closet thing I held to a gun while on KP was a large whisk to scramble hundreds of eggs.

KP was actually a pretty good gig.  You had to get up way early, like 0330 and be a slave to the civilian cooks all day.  On the plus side, you got to be a little relaxed, got out of whatever training your platoon was up to that day, got extra chow to eat, and had some down time in between meals.  And maybe the best part?  No drill sergeants breathing down your neck.

CQ was another duty, or charge of quarters.  I don't remember much about this duty expect that they put you in some building on Post and you basically sat there while people came in and out. Again, this was not a bad duty to have and most of these buildings were air conditioned.

Fire Guard was a frequent job.  While you didn't have to do much, it was often two hours in the middle of the night where you and another poor private sat up in the hall, I guess to make sure no one escaped or came in to the building.  You had to report to the sergeant on duty if there was anything wrong.  The worst shift was 0200-0400 because then you were basically up all day until that next night.  I do remember some heated arguments when privates tried to wake the next shift up. People were tired, grumpy, you get the idea.

Police call was another misnomer.  The military loves this one, and I went on to do this in my Guard unit countless times.  Basically, you form a big line at whatever location you are in and check every square inch of the ground for anything that isn't natural to the environment and pick it up-  paper, cigarette butts, etc..  Being a non-smoker I always resented picking up others' cigarette trash.

I am sure the Navy, Air Force, Marines and Coast Guard had their own little favorites jobs for recruits.  Do tell!

What do you remember about YOUR extra duties, details or grunt work at your training?

Need a source to help you record your military service?  Check out my boo

At "o-dark thirty" we got got stashed in a barracks in 1969. I immediately went to sleep on the floor.Upon waking up, with yelling and cursing by the DI; I knew I was in trouble.(Hey, sleep when you can??).Spent the next morning peeling potatoes for mess duty. Sent my civvies home and my mom immediately put my shoes in the trash.Saturated with potatoe juice.Never had mess duty again, thank god, I'm not an early riser..

Comment by Claudia Bartow on September 17, 2014 at 3:50pm
Bill, that made me LOL. I also hate when I see others throw cigettes butts down or out windows.

In the first few weeks in boot camp one of the guys in the company butted a cig on the ground. Another company commander saw him do this and made us bury the butt......after of course we had funeral. Our company commander saw what was happening and made us dig it up to make sure it was dead! They as you might suspect, we had to rebury the butt. It was a lesson we didn't soon forget. I still cringe when I see someone drop a cigarette and step on it.