YOUR Military Story- What was your first day of Boot Camp like? 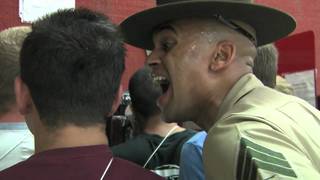 Note: This is part of series to help ALL who served and their families to reminisce, remember and record memories and stories of your military service. Be sure to check out all the other posts and comment in the white space below each one!

In the last post I ended by being screamed awake by a Corporal over the P.A. speaker.  We were in a barracks building in the reception area of Fort Jackson, South Carolina.

I remember scrambling around like all of the other new privates, and feeling that the experience was so, so foreign to little old me from Lancaster, Ohio.  I am sure we marched/walked to the chow hall for the first time, got yelled at a little to hurry up, shut up and eat up. I actually spent eleven days in the reception area because we were waiting for others to arrive who would be part of my company.

In that time we learned to march- very well actually, later leading my platoon to win best drill and ceremony later on in Boot Camp itself. An older and relatively kind sergeant taught us most of the ropes.  The rank structure, the phonetic alphabet, and other basics that we would need to know as newly minted soldiers of the United States Army.  We also spent hours and hours waiting for things- our first true introduction to "hurry up and wait" that all those who served know all too well.

Our arms were pierced with shots, often with one medic on each side doing it simultaneously.  I remember going to a dentist to get my teeth checked, filling out God-awful amounts of paperwork, listening to lecture up on lecture, and always the waiting.

That older sergeant wasn't that harsh, in fact he became kind of like a grandfatherly figure to us and did give us some advice about how to behave in Boot Camp. In retrospect he was actually holding back telling us the horror that awaited us, sort of like when a mom tells their two year old seconds before a shot-, "It wont hurt too much."  Lies!!

So the day came to start Boot Camp.  Nervous?  Heck yea.  We marched to a staging area with our large green Army duffle bags, freshly stenciled with our names and Social Security numbers (wouldn't Lifelock have a field day with that today?) .  We also carried a personal piece of luggage. All of a sudden several large, light blue buses pulled up at the curb.   A dozen crisply dressed (I would later know the name for their outfits- Class B Army dress uniforms) swarmed out of the buses and started screaming, cussing and insulting us.  Our duffle bags were thrown onto an open-air truck, while we were herded onto the buses.

The scene was very similar to the movies- like Forrest Gump and Full Metal Jacket- where the drill sergeants tell you what you really are now- theirs for the taking.  Colorful language spewed from their mouths as they told us to shut up, what filthy, no good P.O.S. we were, etc. etc..  Then we arrived on a different part of the Fort in front of our new barracks.

I remember the concrete squares where we would stand "toe to line" in formation many times after this.  But this was our first shot at it, and of course we were doing it wrong.  We were told to get our duffle bags from the stack of 250.  Our entire company's duffle bags made a mountain of green and they all looked the same.  All politeness and friendship among us faded as we pushed and shoved each other and the bags to find ours.  After what seemed like an eternity, I found mine and scrambled to my square.

In that small square we were told to dump everything out of the duffle bag and our personal bags. This is probably  one of my most vivid memories of Boot Camp, as I was shaking so  much I could hardly do what their screams were telling me to do.

They had us dump everything out onto the concrete.  Our underwear, pictures of boyfriends, laundry soap- everything was on the ground for all to see.  They wanted to check one more time for "contraband", like we could actually get any contraband during the reception time.  More than likely it was for intimidation and embarrassment.  Then the fun task of getting everything back into our into our bags while drill sergeants swarmed in and out of us like bees, all the while screaming that we were too slow.

Once we were all put back together, we had to get up to our barracks room.  Mine was on the third floor. No elevators here. The building was hot, the air was humid and thick, and it smelled of pine sol.  This is another vivid memory I have- My platoon's senior drill sergeant- Drill Sergeant Bullock- chased me up all three flights of stairs.  She was an African American with weirdly-shaped glasses that made her look like an alien.  My out of shape body was trying to carry probably 50 pounds of gear. She cursed me, insulted me and scared the living daylights out of me up all three flights of stairs. It wouldn't be the last time she would single me out over the coming weeks.  Fun times.

I was put in a room with four sets of bunk beds.  My buddy Cheryl from before was no longer my battle buddy sadly.  My new partner was Lyles from Oregon (I can't remember her first name, maybe Sharon?) but she had red hair, pale skin, and was on the edge of not meeting weight, a trait which would later earn her the nickname of the popular children's character "Barney".

The rest of that day was a blur of fear and rules.  I am sure we did some exercise, or lots of it, and I know we sat in classrooms for endless lectures.  There is one thing I forgot to mention in the reception station.  The old man sergeant told us that there would be air conditioning in Boot Camp. We were so excited because the barracks in reception had none, and this was July in South Carolina after all.  We were spoiled privates and how dare they make us suffer so.  The air conditioning was a lie.  For the next ten weeks I was never not sweating, which is nothing compared to what war veterans throughout history have endured, but for pitiful me it was a new experience.

I do remember that night the lights off were at 2100.  We were ordered to write a letter home and they would send it to our parents.  We were supposed to say we were alive and fine.  I recall lying on a cold floor with my head in the doorway of the room so that I could use the hallway light to write.  My mom saved the letter I sent home.  I will dig it out and post it here soon.  I was pathetic!  I was shaking when I wrote it, and you can tell.  It is short and basically tells my parents I found hell and I was in it.  :)

That was my first memorable day of Boot Camp.  Sooooo.....

What was your first day of Boot Camp like? Spill it all below, or start your own discussion and select Boot Camp from the drop down menu.